The Grasse Company believes in amplifying the voices of the greater cannabis community, including those whose culture and history have been largely part of the story of cannabis. With ancestral ties to South Asia, we’ve made it our mission to highlight the plant’s rich history in the region, as both a tool for survival in ancient times and a mechanism for spiritual experience, therapeutic medicine, and recreational use today.

We love to connect history with tried-and-true processes that can stand the test of time, a strategy which has culminated in the processes we use to produce our “solventless” extracts.

Solventless production uses variations of high or low temperature and pressure or agitation to harvest the plant resin which is rich with a combination of oil and terpenes, the essence of the flower. Through this deep historical insight, we can truly appreciate all that the cannabis plant offers. Our Biri line, which aims to celebrate Asian culture through a collection of mini-cigars invented in 17th century India, is the culmination of our love for cannabis and a celebration of our family, culture, and it’s influence on the cannabis landscape.

Cannabis has ancient roots. Humans have a long and interesting relationship with cannabis. In different parts of the world, for different reasons, cannabis played a crucial role in the development of human society. It is believed that when ancient humans came across cannabis growing naturally in their landscape, they quickly discovered its myriad of uses. Fibers used for cordage and fishing nets, yarn for weaving, nutritious seeds, and resinous flowers burned to elicit psychoactive effects.

Cannabis has been characterized as a “camp follower” in early human history. It was carried around by migrating people and found favorable niches where it flourished and was repeatedly utilized, selected and hybridized by ancient people. Archaeobotanical, or archaeological findings of plant matter or DNA, suggest that cannabis was first used in Central Asia and over the years traveled throughout various landmasses, contributing to multitudes of “strains”, both naturally occurring and cultivated.

Hemp and cannabis were likely key trade items from a very early date, with its origin somewhere in Central Asia around the Steppes, a belt of grassland that extends 5,000 miles from Hungary in the West through Ukraine and Central Asia to Manchuria in the East. This area was governed by various nomadic tribes, most notably, the Sredni Stog in what is present-day Ukraine to the Scythians in the northeast of Greece. The use of cannabis in this region is widely noted in the Greek historian Herodotus’s Histories, written sometime around 415 BCE.

As cannabis spread East, scientists have found reliable evidence showing that several domesticated plants were being cultivated in Northeastern China around 3000 BCE in what is now Dongbei. As cultural diffusion spread into South Asia, cannabis was found growing spontaneously from Northern India, Pakistan, to the slopes of the Himalayas through northern Myanmar. It is believed that Indo-Aryan tribes brought cannabis to South Asia around 4000 BCE, where cannabis remains have been found in archaeological sites of Harappan civilization, an extensive agricultural civilization that controlled the Indus Valley.

Our understanding of varying plant genetics from region to region is a large part of our inspiration to specifically feature the farms and flower in all of our products. We believe there’s more to cannabis than the latest trend, so we’re dedicated to highlighting the full spectrum benefits and flavors of each cultivar from antiquity to present day. The consumer always benefits from a full spectrum or entourage effect of all the flower’s cannabinoids and medicinal benefits with solventless products. Grasse produces strain specific cannabis concentrates that provide an experience that replicates that of smoking flower without any extra chemicals or preservatives.

The Early Days of Consumption & Development of Resin

Here enters resin – foraging for cannabis led to the first and most widely used, concentrated cannabis byproduct – hand rubbed resin, charas, collected the same way it is today in South Asia. The resulting dense, compact, resinous lump was easily transported and likely carried by nomadic people throughout their yearly migrations.

“Threshing” plants to release dried seeds is another way that researchers believe cannabis was processed. Hitting the plant to the ground and separating plant matter from the sticky resinous substance is thought to be the beginning of hashish manufacturing. Once the plant material fell to the ground and the preparer removed broken flowers and leaves, they would separate the seeds from the resin powder. By removing the small plant debris and shaking the resin powder through stretched cloth, the cleansed and purified psychoactive resin is likely the origin of sieved hashish.

Today, “concentrates” are the resulting essence of the cannabis flower with heat and pressure to make rosin, heat and fat to infuse oils for edibles, ice and water agitation to make bubble hash, and many more traditional techniques to obtain hash directly from the flower.

The ancient association with hemp and cannabis is evident in China, where it’s been used for millennia to extract fiber, seeds, medicine and in shamanic rituals. In fact, cannabis and hemp are so significant to Chinese history that Ma Gu, or the Chinese “hemp damsel” is one of the eight major deities of Taoism and her image is seen throughout China to Northern Vietnam.

In ancient Indian Hindu scriptures called the Vedas,  based in oral traditions that date from as early as 3500 BCE, one of the earliest references to cannabis is in the Atharvaveda. Here, cannabis is referred to as “sacred grass” and describes how Shiva created bhang from his own body to purify a celestial nectar.

Another Indian spiritual explanation for the use of  psychoactive cannabis is that the Gods felt compassion for the human race so they sent bhang to  earth. Through consumption of bhang, humans could “attain delight and lose fear” and become one with their deity, Lord Shiva.

Another mystical sutra reports that Siddhartha, he who later becomes Buddha, lived on nothing but a single seed of cannabis per day for six years, an interesting note since Siddhartha lived in the foothills of present-day Nepal, a region rich in spontaneously growing cannabis. 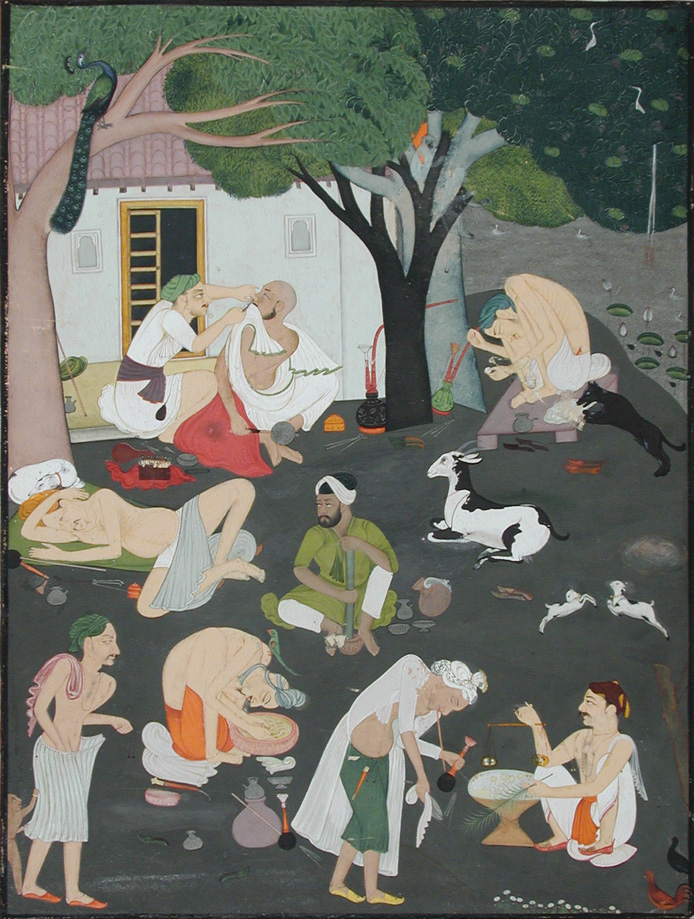 Bhang and ganja have been used widely throughout South Asia in ritual contexts. Presently, bhang is the favorite drink on the eve of Holi, the “Festival of Colors”. Bhang is taken orally in the form of small balls or mixed with water or milk. Simply, cannabis leaves are pounded, mixed with sugar and black pepper, blended with water and added to milk, thin yogurt lassi, or milk tea.
Occasionally mixed with ground nuts, spices and aromatic resins, it is a commonly consumed beverage with spiritual significance.

Cannabis is added to various foods from sweet confections called halva, dumplings called pakoras, small fried chickpea balls, to curries and green ice cream called hari kulfi! It seems we have South Asia to thank for the invention of edibles that span beyond brownies.

Cannabis is closely intertwined with Hindu rituals and its association with spiritual practice is complex. Even when Hindu people could be severely punished for consuming alcohol, consuming bhang had no penalties. The Lord Shiva is the deity most often associated with cannabis, sometimes referred to as Lord of the Herbs, depicted with a bowl of herbs under his arm, and a favorite of the chillum smoking sadhus, or religious acolytes. Devotees even refer to Shiva as Bhangeri Baba, or “the god who prefers the enjoyment of bhang”. During religious rituals associated with Shiva, bhang drinks are offered in his name. In Nepal, Shiva temples are filled with worshipers, hermits and sadhus who smoke ganja.

“Smoking” Cannabis Introduced to the World

The Scythians method of burning cannabis seeds within a small tent suspended over sticks is considered to be one of the first examples of smoking prior to the development of the New World and is reminiscent of vaporizing through similar modern tools. “Smoking,” or the inhalation of smoke or vapors through a device that holds the burning plant matter, was seen in censers, rods and leather flasks, the earliest evidence of intentional inhalation of cannabis smoke, which predates common Western methods by nearly 2000 years. Bowls called “pipe-cups” and “footed vessels” have been found at archaeological sites from Romania and separate locations along the Black Sea.

The introduction of tobacco smoking in Europe and Asia around the sixteenth century changed the usage patterns of both cannabis and hashish. Inhalation of vapors was introduced to the West and slowly, people began to smoke the resinous cannabis rather than eat it.

During the 17th and 18th centuries, smoking cannabis gained popularity across Europe and Asia, peaking during modern times in the late 19th, 20th and now 21st centuries. However, the same techniques from ancient times remain. Separating resins to create hashish dominated the international market and was a major commodity for East and Central Asia as well as North Africa. Today, cannabis is consumed on a larger scale than ever before, the United Nations posits that cannabis is the most widely produced and consumed “drug” on the planet.

Grasse intends to continue to highlight the rich history of cannabis through our dedication to producing quality products using time-tested methods and celebrating culture with products like Biri. By recognizing the long history of cannabis, we can fully appreciate the impact that this plant has had on human history and the cultures that elevated its place within our collective society. Using this framework, Grasse has been able to take ancient techniques to create products that are easy to consume like our Ice-Hash Pre-Rolls and edible gummies made with rosin.

Facebook Instagram
Do not operate a motor vehicle or machinery under the influence of this drug. For use only by adults twenty-one of age or older. Keep out of the reach of children.
Copyright 2019 – The Grasse Company